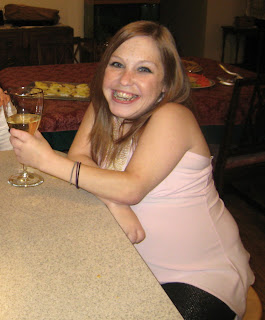 
I have so much amazing stuff going on right now, it's ridiculous. It's actually 53 degrees outside right now, and the snow is melting (I'm afraid to say it.....) I'm sitting here with my window open, in shorts (pj's....but still) and it's just divine. I
I've been so energized and pumped, and as for my social life picking up in April, that has definitely been rocking as well. I've had a dinner date like every night this week, last week Matt and I went out and played Wii (then I hurt for like 3 days...), and Jordan and I planned a wine and cheese party last weekend that was absolutely superb! Shan came down, and we got all pretty and went over early to help him set up and cook, then everyone else got there and we just drank wine and talked, and oh my goodness I have not laughed so hard in forever.
It was amazing. Robin was there, from high school, and we reminisced about everyone and high school, and it was such a mind trip.

I also randomly reconnected with Jake, who, for awhile, (I won't lie...) I had some mixed feelings about. I sort of still do, but we've both grown up a lot and I think we can really relate to each other right now, being young and successful and doing things bigger than Maine. I'm really trying to connect with people like that right now. I need to realize I'm an adult and take advantages of opportunities given to me, and connect ith people I know....

I'm going to be going to California in June for the Oley conference, which is just for people on TPN! I talked to work about it, and told them how bad I wanted to go, and how much I feel I could not only learn, but offer to others, since people on TPN seem to get sort of hung up on transition.... I'm kind of a big deal.... (lol, but it's true)
AND I told Danielle I was coming over and I think we're going to go down a few days early to spend time with her and Joey in L/A. Can we say excited? I wanted to go to Cali soooooo bad, now it's just happening. Wow. It'll be amazing.

Speaking of amazing, I also booked a room yesterday for my birthday party. I had a training in January at a place nearby and it was so beautiful I decided I need to have a party (and because my 21 and 16....were a little lackluster). I'm so excited!


anyway I need to run, I'm on a phone call for work and then Andrea and I are going to get some dinner, cause it's goooorgeous out!

xoxo
Posted by Princess Malphaba at 4:50 PM No comments: