Sometimes I just want to go back to being 17. When I didn't know any better. To the days when DD ice coffees were orgasmic, every Denny's trip was exciting and dancing in the Oak Hill gym til 11 was a "crazy night out."

It's really weird to think how things can change...and will never ever be the same. Things happen and are said. People come and go from your life, and you just never know. You can only live one day at a time. but when you take it all in and really look back. Just wow. I don't even know.

Of course it's super cold out tonight and the heat came on, which means winter is coming, which means I'm getting depressedish and emotional.... even though this year will be soooo different I can't help it.

Right now I need to just pull myself away from 2002 Mix CD's, old Facebook wall comments, and pictures and give myself to sleep for awhile. Tomorrow's another day. and it isn't Monday!

Posted by Princess Malphaba at 2:08 AM No comments: 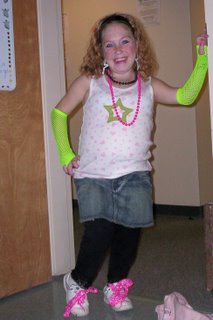 Oh it's been crazy. Not crazy good, or crazy bad.Just crazy.
The 80's social was pretty much amazing and can probably be logged as "THE event of the year." We had an incredible turnout, the music and people were amazing, I went without a single cent, had drinks covered for me (cause I'm fab like that) and oh yea I WON the costume contest! Weeeeeeee. It was just amazing.


The next day my knees hurt soooo hard from dancing. It was lovely.


Since then, stuffs been kinda up and down. The weekend was nice. I slept for like 12+ hours, which I pretty much needed, like whoa...
Then this week, I've just been kinda rollin' with things, trying to get my work done, and not fail out of school. I think I'm doing ok! yay for that.

Last night was pretty fabulous too. I worked a little bit on a paper that isn't due until next week, which I felt good about, then I was at the snackbar with Miss Andrea and Mary, and Meg randomly called me and asked if I wanted to go to the bar with them. I didn't really have anything pressing to do, so I said suuuuuure.
Meg, Jen, Caitlin and I all went down to the bar, in the pouring rain...almost got attacked by a skunk, but finally got there and had a lovely time. I was cold and soggy, and got an amazing Irish coffee, which is like a Denny's cappucinno x 50.
we all hung out, until Meg and I started making fun of people a little too evidently and had to remove ourselves to another room where there were other people and it was fun. Then Caitlin and Jen left and a while later, and we trudged home in the even worse pouring rain. But it was pretty amazing and we didn't care.

That's the stuff memories are made of!

Tonight was busy, but after my two meetings, I snuck off to The Landing and listened to the band they had there. I splurged and bought the CD and felt so at peace with being alone. and the new Landing is gorgeous. I need to go there more often, like I did a couple years ago. It's wonderful for some reflection and me time. They have surprisingly good music too I discovered..(and had discovered the night of Rachel Griffin)

Now I'm off to seriously relax, read and go to sleeeeeeeep! Yay for surviving another Hump Day!

Check out The Whatnot!

It's Fall. And stuff like this makes me wish I had an apartment super bad. Oh yea, and I just watched the Laguna Beach thing on Overdrive, which showed one of their rediculously glamorous, way too big houses. That helped.

The maple stuff is out at Starbucks too. I may have to try the maple machiatto when I go home this weekend. Last year, only Canada had it.... and Maine...cause we're basically Canada.

Last night was fun. But I still feel like this week is just weird. Everyone feels kind of off.... but what can you do. I tried to have a night in, but like after three episodes of "Strangers with Candy" and 45 minutes of Gilmore Girls (yes, yet another guilty pleasure) I got super antsy and ended up going to the bar with Meg, then again with Nate and Roxanne, and hung out in their apartment til like 2.
It was fun though. It was a gorgeous night, and I really just wanted to be out doing something since pretty soon it'll be too cold to want to go anywhere. The moon was pretty, and it was just a very laid back good time. I needed the fresh air.
Now it's wednesday, and I sort of have a busy day, and it's blah. But we have a class meeting tonight, then LAGUNA. and I may subscribe to CosmoGirl I've decided. It's cheap....

xoxoxox.
Posted by Princess Malphaba at 2:20 PM No comments:

I feel like it's been a really significant past week, and I'm basically a different person since last October...but we've still come full circle it seems. It's just weird. who knows.

Last week was really good though. I went out like five days in a row, which yes, is a little crazy, but it was fabulous. For the first time I feel like I'm really LIVING in college. And I truly do have the best friends like ever.
Thursday we all went to the bar and even though there was definitely Fall in the air, we all at on the patio with our drinks and just talked and laughed for hours. It was really really wonderful. It's so great to feel like I finally have a "group" and it kind of includes everyone.

Then Friday I slept on the way home then quickly changed and Jordan and I hit up Gritty's, which is kind of becoming our Friday tradition. It was really fun. I have not laughed that hard in sooooo long. It was much needed for both of us. Saturday was Aimee and Margarita's. Basically I've just been seeing everyone and having a good time, which is pretty much what I need to do, because otherwise I find fall is kind of tough. and some things have happened, which have left me kind of confused emotionally, but it's nothing serious, just a strange replay of last Fall I guess.

Sunday, I ended the weekend with a dinner of filet mignon with my family and a hot bath to warm up and rejuvenate before coming back. It was pretty much amazing.

I'm kind of ready for a downish week now, and definitely another weekend. Family coziness, friends, and pumpkin spice lattes, preeeetty much make my life.

autumn <3
Posted by Princess Malphaba at 1:21 PM No comments: