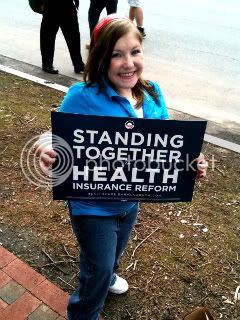 You Barack My World!

So, one would think I would be in bed by now. and I should be. of course. But I'm not quite ready for today to be over.

First of all, it was absolutely amazing weather here, which is perfect because it literally had rained all week, until today, and even was overcast until we got there basically. It was the perfect weather to be standing/sitting in line for about 4 hours with like-minded people, sharing snacks and getting a tan you didn't have to pay for!

By late afternoon it was sort of like a parade or street fair for the political. Reps were there, chatting, people were handing out balloons and pamphlets, and people were getting so fired up. We were told if somebody from "the opposing team" showed up, or we felt there was negativity just keep the peace and start chanting Yes We Can (which we spent a good portion of the time doing anyway)

Around 12:30, as we were told, they did show up. A good number of "tea partyists? Tea baggers?" I don't know. neither term sounds pleasant. But it was very intense as it built up to going in, with them on one side, us on the other, and secret service men between us. But finally we crossed through the barricade, and it was a surge of energy I can’t quite explain, moving forward even with so many shouting against us. We held strong with our golden ticket, to get to what we all came there to see :)

It was actually pretty smooth how quickly they got everyone in and seated (although only about half the people were able to sit... we were like "um hi, Mal can't stand in that crowd, she'll get injured. And need health insurance. Counterproductive." So we actually landed pretty decent seats on the bleachers, which were the "accessible" seats.... really? Bleachers, accessible? I didn’t think that made the most sense, as I saw many disabled and elderly people struggle with climbing the narrow stairs and finding seats on the bleachers. The seats worked for us and we were lucky, because couple hundred with tickets didn't even get in! 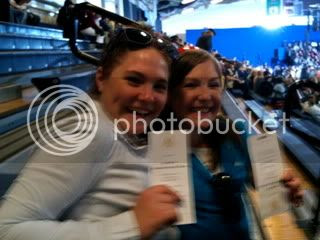 The program began (I keep calling it a show… you can’t teach a Broadway dog new tricks) with the Pledge of Allegiance (which I couldn't say due to the lump in my throat the size of my fist... my sister said she never said it during her time at her last school.... but today I heard her say it like her life depended on it), subpar performance of the National Anthem, then…HE WAS THERE. In the same room, in his white shirt and tie, jacket off, sleeves rolled up.

I have heard a lot of speeches of his, but this was specifically for the Maine people. And oh my god, was he funny. He talked about the values of Maine, and how they're real and how it's people like us who take those values of hard work and determination and bring them to Washington... and I got a little pheklempt and was like "well hey. He's talkin' about me."

He took pieces of the healthcare bill and attributed each to a story he had heard from people in Maine, one of which was from one of our very own family leaders, so that was pretty exciting, and it just solidified how real this change was, that he was mentioning people we not only know, but work with, and have been sharing in the journey with.

He explained a lot, answering some questions about the bill itself, made us laugh, made us cry, and it was all over way too soon. But at the end, instead of the hokey patriotic music they play when you're watching it online and he finishes, they blasted Brookes & Dunn- Only in America (country music... which I have a love hate relationship with because it represents everything that is Maine) but it was PERFECT. I have never loved a country song so much. Then was Beautiful Day by U2, which was not only perfectly appropriate, but has been with me in so many other chapters of my life, it just made sense that it was there in that moment. Then came Bruce Springsteen, and it was like we had just gotten free tickets to the best. concert. EVER.

As we were leaving, my sister said, "I needed that so much, you don't even know. I'm inspired." I think I’m going to have an advocate in training by my side. :) 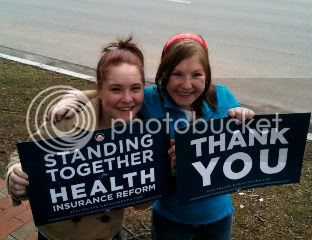 As the music finished, my mom turned to me with tears in her eyes and said. "This is what it's all about! This is the change we've been trying for in all of this." I grabbed her hands and said, "YES!! THIS IS IT!!! DO YOU GET IT NOW? DO YOU SEE WHAT HAS GOTTEN ME THROUGH THESE PAST FEW WEEKS? WE'RE LIVING THE CHANGE." In that moment, they GOT IT.

And for me I think, this was my turning point in the fact that I know I am meant to keep truckin' in this world, and I'm pumped to do it. And something that NOBODY else could do.... that silly president of ours made me PROUD to be from Maine! (I’m only just beginning to admit it... and I'll still leave) But we have a lot of good here (besides the corny lobster t-shirts). We do have our own unique work ethic, and people take care of each other. With all those other people, from Maine, amazed at what we have achieved I was proud, and excited. It was the weirdest thing. I will be one of those people who will bring those values to Washington, but for now, I can nurture them here, and I will keep coming back. I think a part of me will always be a small town girl- and suddenly, I’m ok with that.

As Barack once said, "It is easy to get caught up in the cynicism of what is possible in this country,” but today, sitting there, waving signs with people who share the vision of hope, and seeing Americans of all ages (including the youngest ones who don't even yet know what the word insurance means, but know that they are spending a day with people they love seeing something really big), all generations come together to celebrate victories we HAVE made... today, it was a little hard to be bitter and discouraged.

Not that we don't all get in that place, because it's normal, and I'm sure Obama has days where he goes "Why did I choose to do all this? I'm just one man!!! I want to go home and watch the game!!!"

But he gets up again and does it all the next day and remembers why he does it, and still maintains the energy to fire up every state in this country.

He gives me hope that, among other things, you and I can go on in ruling Mal world, and maybe even make a difference along the way doing it. 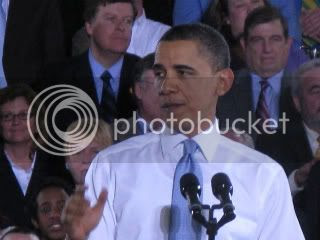 Posted by Princess Malphaba at 1:10 AM 2 comments: