So this is happening!

This last month or so has simply been a whirlwind of nostalgia.  Shortly after my last entry, I turned 27 (WHAT!?!?!?)   And although last year was probably the best birthday I have ever had, this one came close.  I just spent the weekend by the pool and there were surprise cameos by my 2 best friends.   It was crazy. 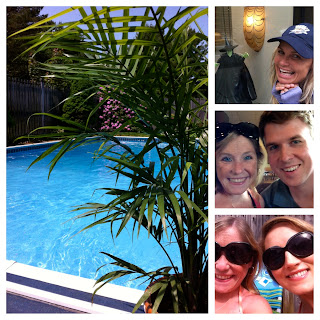 I have also been going through so many boxes, and memories.  It has been quite a trip unearthing Spice Girls barbies, Furbies, Karma bracelets, and pretty much anything else that could be hoarded from the 90’s!

Two other crazy things happened around that time- because well, this is my life.  I got a call, the weekend of my birthday, from another good friend of mine.  Some of you may know her as Galinda, or have seen her on Glee?   Perhaps.  Her name is Kristin Chenoweth.

During my trip to DC, I was listening to my “defy gravity” playlist on the airplane, and I had a random thought that I should text my friend (and famous musical director) Mary-Mitchell Campbell, and tell her that if she happens to talk to Kristin, just to pass the word along that I’m doing really well.  I often wonder what it is like for these celebrities (or camp staff members etc.)  to connect with a “sick kid,” like we did, and then not really ever hear about them again and just wonder….

So I wanted her to know I am indeed kicking asses and taking names.  Well, no sooner did I get home from my meeting in DC (which will be another entry coming soon)    K. Cheno had tweeted that she was WITH MMC and they had been talking about me!  0_o 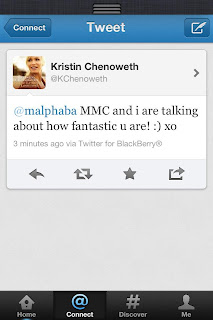 The next day, we were driving to the Nana & Papa’s, and my phone rang and it was MMC.   No.freaking.way.  So I answered, and come to find out, her and Kristin were touring together, and were just rehearsing, and stalking my blog and facebook, and wanted to catch up.  So we did.  We chatted for almost an hour, about life, and Broadway, and as it turned out they were actually doing a concert in Boston the week I was going to be there!   Kristin said she wanted to invite me, and told me to round up whoever wanted to go, and to plan on hanging out after!    We continued to text over the weekend as they were flitting around NYC getting mani/pedis and lattes at Starbucks, and I sat by the pool with my family.

The concert was absolutely incredible, and very timely.  Even more ironically, it fell on the exact day as the benefit for Mr. Paul L. Newman that Kristin and I reconnected at in 2009.   After the show- we got to hang out a bit, and we Skyped a very excited Owen  : )   Kristin said to me, “You know, I think Paul arranged this, and I think he’s smiling right now.” 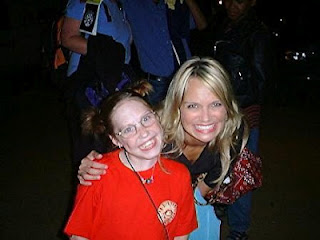 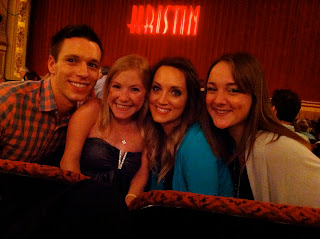 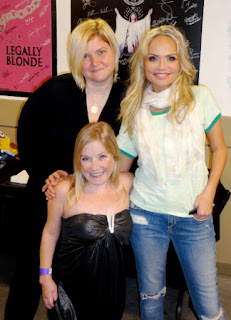 I had gathered a group of amazing people from all aspects of my life for the show, and it was just such a great, cathartic, relaxing evening!  Then, as I didn’t want to spend the rest of my night trying to figure out how to get back to where I was staying in Sudbury, MA with Pastor Jordan, it was arranged so I could actually just stay with MMC.  Where they were staying after the concert.   After the cattle call of all the people with purple wristbands, MMC and I followed KC out the stage door.  I have had some stage door experiences, but mostly they consisted of very confused low budget paparazzi who weren’t sure who I was…   But this was legit.

We exited to about a hundred, crying 12 year old girls, and while Kristin signed autographs cause she’s fantastic, MMC and I were hurried into a black SUV with tinted windows to sit among the screaming fans.  With a driver named Joe.  Yep.  My life.  We talked non-profits, health education, and where I see my life going now (HA!  Who knoooows)   Then we headed over to the Mandarin Oriental.   I won’t bore you with all the details, but check out our digs here….

Toto.  We’re not in Kansas anymore.
Except til we were.

The wonderful Sir William of Cambridge picked me up in his Toyota, and we were headed back to the “real world” where I had to figure out how to sign a lease and pay all the money we needed to, to wrap up the process with our apartment.

OH YEA!  We found an apartment!  The week before my birthday, Owen and I snagged an accessible studio apartment in Allston.  It’s in a brand new building, which is barely even finished yet!  Our unit is fully accessible and the building is just crazy.  It is definitely more than our original budget intended, but at the end of the day we looked at all of our options, and for what we get, and will not have to worry about (there’s a front loading washer/dryer IN the unit, lowered countertops, brand new appliances, fully accessible bathroom, trash/recycling on every floor) it is worth it.  We will actually be able to focus on school, work, and our life transition and not agonize over who will get the laundry out of the basement and how we will get it back up.

It’s difficult from an advocacy standpoint, because it is AMAZING (also ironically, it is even on the “penthouse” level) and you know what.  I DO wish that we could just rent a house with 3 other people and pay $500 a month, and not worry about it.  But we wouldn’t be able to get into it- or we would have to adapt things on our own.  I have to believe that this unit fell out of the sky for us, because the universe wants us to do this.   Truth be told- I found this place because I had seen the listing many times, and just wanted to see if they had accessible units.  If they didn’t I wanted to know who I had to talk to, to see that new buildings didn’t get built without them.   When I got a response saying they did, I decided to just ask about the price.  I come from a mindset of “You never know until you ask,”  and, “Don’t tell me something is too good for me.  Ever.  If you want something bad enough, or if it’s meant to be, it can work out.”   I was sent some floor plans and price quotes, and for what we had previously been shown for things that didn’t even meet our needs, it was moderately “reasonable.”   I will be perfectly transparent.  We are paying $1750 for a studio unit.  But it’s ACCESSIBLE, and safe, and near where we need to be.  It’s the best we’ve seen.

Check out the building here!

We scrambled and were able to get everything in to “secure it,” then we went back and forth with paperwork for quite awhile, and sometimes it felt very 1 step forward, 2 steps back, as very time we thought we were done, we’d need to sign, or pay something else.   But… as it stands right now, we got approved, and all the paperwork and fees are paid.  I get to see the building next week when I’m in Boston, all my financial aid stuff is going through, I am registered for classes, Owen has his one way ticket booked, and the going away parties are planned!
This is really happening!   It truly won’t be real until all the parents leave, and we just stand in our 500 square feet and go, “blink blink.  Um, wow.”

Now it is crunch time, and I am preparing for the Face Forward Conference in 2 weeks, then it is all eyes on the move!  My focus is a little frazzled and I am dreaming about conferences, and finding doctors, and there are days when I just want to throw all of my belongings in boxes, and just go somewhere tropical with no cell service until I can just show up at our apartment.  That obviously won’t happen, so I’m just diving into work and planning until it’s time to head to Beantown.
30 days!

Since Owen and I have a group of amazing supporters that spreads all over the country (and beyond, really!)  We wanted to create a way that if people wanted to do something, or give us a gift but can’t exactly attend our respective parties, you can be able to this way.   It is reputable, and secure, and of course there is NO expectation or obligation, and we totally get how tight times are right now, but if you are so willing to help out- there it is, and we appreciate every gesture of support!   Help us reach our dreams, to prove that other young people with disabilities can reach theirs one day!

We love you all.  Thank you to every single person who has helped us get this far.  This is just the beginning! 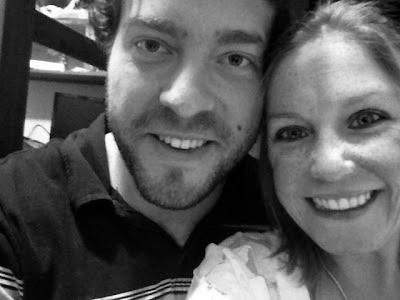