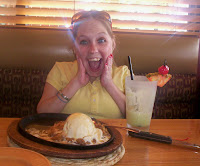 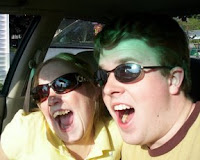 It's cloudy out and I'm alone, and it basically feels like last summer. So I went and reread all my entries from last summer (oh boy)...and now I need to write to remind myself of all the things that are wonderful, and how that is the PAST. We're in the now.

OK. So, yesterday I started my internship at mom's agency, and it was ok, but basically taught me the one thing I do not want in life is to be sitting at a desk for hours every day. Wow. I did data entry and kept falling asleep (holy crap... just typing this makes me feel better. I'm crazy for loving the sound of keys typing... I'm such a writer)

...but that also could have been because of the day before. Colin came home for my birthday and we literally spent the entire day together (we concluded it's the first time he's been home for my birthday since we've known each other). It was absolutely perfect. We did everything we've always done. He bought me lunch at Applebee's and "surprised" me with the birthday dessert routine, and of course we sang with them, cause...well...it's what we do. And the staff was like "Do you guys want jobs?" (I didn't think to suggest Colin maybe should actually take them up on it. wow that was mean) And he made me another mix CD "Birthday mix 07: A 5 Year Tribute" and got me Grey's DVD's (season 1 but I'm just going to exchange it for season 2. It was so absolutely perfect. It was just us...and it hasn't been since...oh....January. And we talked a lot about life and relationships, and writing. and laughed a lot. It was very needed.

Then we saw Shrek 3 which is awesome, and we laughed through the entire thing (although I'm not sure if it was the movie or the kid behind us who kept whacking Colin in the head with his popcorn bucket) There was a part where they played the intro to One Singular Sensation from Chorus Line, and literally we were the only two people laughing in the entire theater.
After that was Starbucks, and we ended up at Bates. they still had their graduation set up, so we played "Bates Graduation." Holy irony. We kept walking around and I was like "please... I just have to do this... to realize how wrong it would've been." And I did...and it did feel wrong (beyond the fact that nobody was there, of course). It was sort of an unsaid closure...and we got to graduate together after all. Then we chased squirrels and sat by the pond. Some things never change. And I'm glad.

After that, he had to go home for dinner. But we reconvened shortly after he ate. We were supposed to wait for Brandon to call, but because I was in Lewiston all last summer when Colin wasn't, I knew he wouldn't til 10 or 11 and I remembered I had to get up at 7 the next day to go to work with mom so I called him and said, "Can we just hang out, and if he calls well fine, if not, oh well..." and really. I didn't want him to anyway. (he did call at 10:30 as predicted, only to bail on whatever we were going to do, so I called it pretty well)

So we decided that was a good idea, and I went back over to his house, and we had amazing red wine (which I usually hate) and watched Mulan. (yes the Disney movie).
After the movie we kind of just laid there, but it was already 11:30 so I decided I should go home. So he drove me home.
and I kid you not.... We saw a shooting star.

The whole day and evening were just so quietly perfect. I wouldn't have wanted my birthday to be any other way.

We're good, and I'm happy, and for now that's all I need.

Ok.. in all honesty, I feel better now. I'm going to go read more GOSSIP GIRL, CAUSE THE NEW ONE IS OUT AND I GOT IT FOR MY BIRTHDAY
and have a snack.

You know you love me,
Mal

Posted by Princess Malphaba at 10:27 PM No comments: 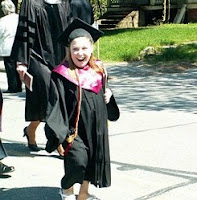 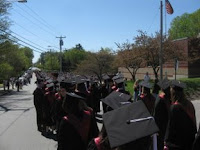 Like all big events I needed some time to process things before I could attack it here. I haven't necessarily had any big epiphany or big life changing revelation, but I've had a lot of time to think, and everything IS different. It's all about change. And how willing you are to accept it, or go with it.

On our big day, there is nothing in those envelopes (surprise! we psyched you out!) but in our choosing to wear those silly hats and walk with our friends over that stage to take that folder, we are making the decision to accept the change that is leaving UMF. We've done our time, taken what we will from it, and are ready to move on. After that, everything really is in our hands. Like someone very important to me said tonight, "I think that is a good way to look at it, though... we got what we could from school, and now it's time to move on to what's next, except this time, it's life, not more school."

That is the absolute truth. After we cross that stage, our life is in our own hands, and it all comes down to choice, and taking risks. We can take that job that's a little outside our comfort zone, or sit at home and wait for something in our home town to fall in our laps. We can be a little scared, or feel perfectly safe and miss out on who knows what. But in that sense, it's exactly like college. We can not kiss that boy, cause we're afraid of what might come next, or we can close our eyes and go for it...because really, who DOES know what's ever coming next?

Things had begun to change even before that last day. As hard as I tried to fight it. I got emotionally attached. I needed to make the most of my remaining time with people I might never see again...and everything else...seemed petty. I learned to live for Farmington nights, laughing and drinking on the patio of the granary. I fell in love with every single writer in my Senior seminar class, and I learned their stories, and I had grown with them. and they grew with me. When I made the choice to read the piece I knew I had to read at my senior reading, they knew why I was crying at the end. And they hugged me for it. I fell in love with the entire class of 2007. From dressing in togas and talking on the porch, to belting out Livin' on a Prayer as a last night out, from the massive standing ovation I got from them when the president recognized me during graduation, I felt like my heart was going to burst with affection and adoration for every single one of them. They had noticed. They did know how hard it was for me to do this. but they shared in my excitement that I DID IT. We all did it. It isn't fair that we have to leave when we're really just getting to know each other.

But that's another choice we have. To keep in touch. Maybe we will...maybe we won't. Some memories we'll hold onto forever, and choose to go on and make more together. Some we'll file in the "lesson learned" pile, and call it a day. But no matter what we do, it happened, and we learned, and we did it together. And we'll always have that.

And so here we are. I'm free, and independent, and adult, and HAPPY. I'm happier than I've ever been, and it's so different from last year at this time (good lord, when I wasn't even 21).
It's going to be a different summer. But it'll be good, I can feel it!
With all the things that change, some things don't. There will always be that friend who just knows when you need to hear their voice, there will always be a welcoming bed with a cuddly kitty, and there will always be the friends and family who will stand by you no matter what, and when there is nothing else.... there is all of that. But right now, there is that, AND everything else. I have a speaking gig at camp, and internship awaiting me, a job waiting for me, AND A BOOK TO WRITE! And I'm ready to take it all on, head first!

So class of 2007, and all of my UMF loves. Thank you. For everything. Thanks for the memories. :-) and to all of my friends here, and everything yet to come. Well, the rest is still unwritten. So let's live it. Cheers to a beautiful summer of 07!!!!!
<3>
Posted by Princess Malphaba at 2:02 AM No comments:

Happy May 2007!
Yesterday I had my LAST college class EVER. That's weird.
And my senior reading was last night, that I've waited four years for and poof it's over. Things are just going to keep being over.

So, basically all I have left for academics is a paper for soc, my science final which I'm not even worried about, and to print another copy of my portfolio to keep in the BFA office. Then it's mission graduation!
OH YEA, AND MAKE MEMORIESSS!

It's so overwhelming. Then I start my internship at mom's job, then real work, which I'm super excited for... and I've started doing serious apps for moving to Portland at some point. And my birthday is like 2 weeks after graduation! (and I get my cell phone upgrade which I'm excited about) Everything is happening so fast! Sloooow down time

but it's amazing, and I've never felt better. I never thought I'd be leaving on such a positive note. I've come full circle....
Posted by Princess Malphaba at 11:49 PM No comments: