It's so weird, because I think doing my nails inspires me to write. I love the sound of nails on my keyboard. It's therapeutic, even when everything else is driving me nuts. I just did my nails hot pink (well, magenta) for the beach tomorrow for Maisy's birthday, and thus feel the need to write about everything that's gone on since last time! I can't believe she's going to be 15.... ugh. That scares me.... 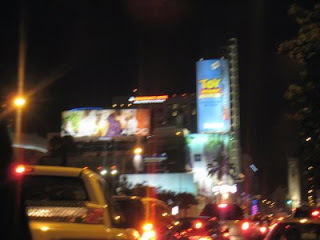 Anyway. California was amazing. As anticlimactic as Miami was, that was how awesome Cali was! We flew into San Diego, where Danielle met us to drive us back to L/A with her and Joe for two days. We did everything. We went to Pinkberry and had dinner on Sunset Blvd right next to Ketchup, (which was totally where Jason and Lauren ran into Heidi and Spencer...). Then we went and walked around Beverly Hills for awhile before going home. I won't describe every minute, but the next day was shopping, lunch in Malibu, and more sightseeing.
The last day with Danielle, we went to Manhattan Beach before driving back to San Diego and we had our final stop at Starbucks together, and I bought an adorable Roxy purse at Diane's surf shop where the lovely girls of Laguna shopped for Cabo....ahem. 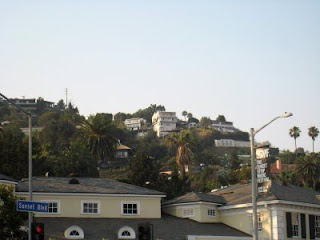 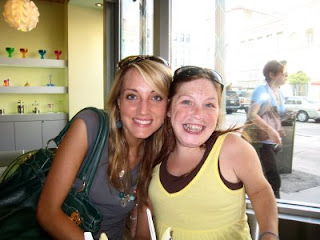 Every minute was fun, and I was totally reminded of why she was (and that she really is) my best friend, which of course also made it a lot harder to leave her once again. It was awesome to reminisce and talk about how we had not imagined ourselves being able to hang out in LA back when we were in high school, but we had both known we wanted something more than rural Maine...which is why we were both out there and other people were home with babies in trailers....(not there is anything wrong with babies, if that's what you want to invest your prime years in, but it was the it happened for a lot of people...) 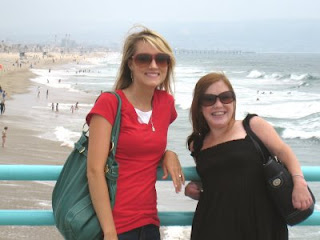 Leaving was hard. We had a last dinner together at a sushi restaurant in San Diego and I checked into my hotel (which was pretty gorgeous and had an amazing pool). It was definitely hard to switch into conference mode for the 8th annual Oley Conference after being in superstar/Hollywood mode and having to focus on my "medical issues" but balancing the two is what I'm known for I guess. Sometimes I have to remind myself of that.
It was really emotional to all of a sudden thrown into a world where TPN was everywhere, and all the people were hooked up. I guess I didn't really expect to be phased by it, but it was an overwhelming sense of "coming home," if you will- to see everyone else dealing with the same issues as me. For those reasons, the first day was kind of rough for my mom and I (and that fact that once again, my phone and computer were all screwing up at once so I couldn't even connect with the people from home) 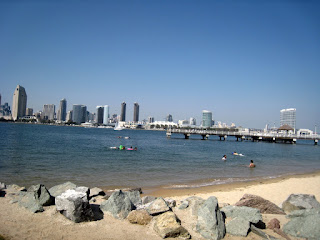 I won't go into too much detail, cause a conference is a conference, but it was such a wonderful experience. I met some amazing people, specifically young men about my age, who, by the end of the week, we were finishing each other's sentences. All the twenty somethings got to go on a Trolley tour and see San Diego, which was so incredible (but a little too long was the general consensus) and Alicia, our moms and I went to Old Town one night for dinner in a pseudo Mexican town (where my mom had actually already been the last time she went, which was really kind of ironic). We definitely made the most of every moment we had. 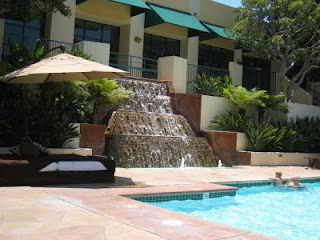 The last day was the "picnic" which was actually by the pool at our hotel, so the scheduled activity was to hang out by the gorgeous pool all day. Absolutely perfect. mom and I grabbed some chairs fairly early and just talked to people all day. That was when some serious bonding took place. I also got the chance to really network with the lovely woman who does the Oley newsletter. We've talked a little since then and she wants me to write an article for the newsletter about transition for both parents and youth. Yay poolside networking!
I also really spoke up about my experiences, and told people about my work now, and they invited me to come back next year to help plan the "transition" session for the young adults, which I'm really excited about! My family is already just assuming we're going to go, and hopefully make a vacation out of it. There was definitely a void without the dad and sister there. It's also in St. Petersburg Florida which doesn't hurt. 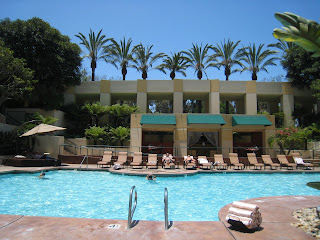 Looking back, I realized I got so much more out of attending Oley than I thought I would. I had some preconceived notions from the last time I went and was ready to go to simply learn, and share the information I knew, but what I came away with was a realization of (once again) how lucky I really am, to have such a handle on my health and be able to live such a normal life, AND that there are other, REALLY COOL people doing the same thing, and we really are "all in this together." I made some amazing friends, got to see some old ones and had an awesome time, and I am definitely an Oley fan for life!

More to come, it has been such an eventful summer but I've been bad with updating. Stay tuned!

xoxo The Mal
Posted by Princess Malphaba at 1:51 AM No comments: